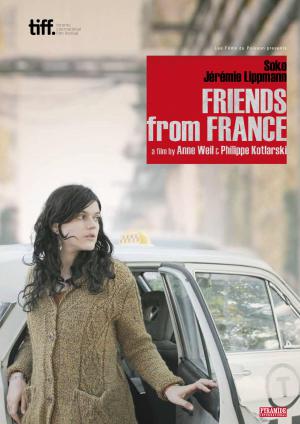 Summer 1982, Leningrad. Jerome and Carole are waiting in line to go through the customs service in order to enter the USSR. They are cousins and both are eighteen. One could have mistaken them for a perfect couple of tourists in love, but for a coat too warm for the season, and a streaming sweat on Jerome’s face. Their secret is in many hidden pockets, full of prohibited books, chocolates and medicine. It was Carole who insisted on the trip, planned it and organized it. Jerome and she are poles apart, but for his secret love to the girl, Jerome would follow her to this world of real Socialism.

"Hi, we are your friends from France," - they are whispering in the telephone booths in the evening darkness. Their aim is to get in contact without being noticed and to help as many Soviet jews,  who are persecuted by the government, as possible. For example, to help Victor, a physicist, who once applied for a visa to Israel and who is now cleaning the streets.

They are worlds apart with professional spies, they are nobody but amateurs in this secret war, but they are driven by the most sincere desire to help. This week in Leningrad, dangerous, thrilling and ambiguous, will never be forgotten, leaving an everlasting trace in their lives. They will come across many people, and these meetings will be sometimes strange, sometimes humiliating and sometimes even life-threatening. They will live under the pressure of constant fear of being caught, risking every day, feeling dissapointment and jealosy - and finally they will get lost in love, completely and irrevocably, only to betray each other later.

Later in Paris, Carole will try to get through to Jerome, but he won’t even be able to take her hand, not talking about looking into her eyes, and she won’t find enough courage and strength to tell him that the child she is expecting is his, Jerome’s. And only ten years after this trip they will meet again in Ashkelon, a magical city right in the middle of the desert, where they’ll be given a rare  second chance to find a way for this impossible love.

Valery Ghergiev and the Mariinsky Theatre