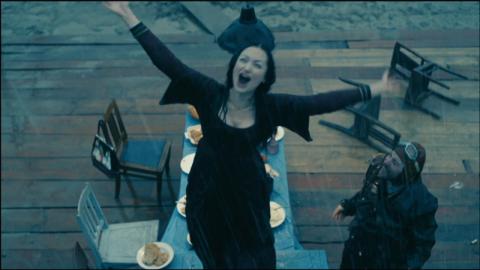 The Official premiere of the film BITE THE DUST, directed by Taisia ​​Igumentseva will be held on May 18, at 11:00 am at Bazin into the Special Screening Section of the 66th Cannes Internationla Film Festival.

This film tells us about a tiny village, where everyone knows each other. An elderly herdsman, Vasilich, devotes all his time to taking care of a doe-eyed cow named Candy; lonely Granny Zina curses the government; married women glance enviously at other women's husbands; and the local inventor, Vanya, entertains the children with his ingenious devices. One day, the villagers hear the terrible news on TV that the most powerful solar flare ever has taken place, the effects of which will destroy all of mankind in 24 hours. After recovering from the initial shock, the villagers come up with their own way to bid farewell to life. They decide to throw an end-of-the-world party. Tables are set, pies are baked, and some gather their last courage to make major life decisions. But the end never comes ... Instead, things get a bit hot under the collar. The villagers realize that life as they know it is over ...

Director's note:
"One does not need the face the end of the world to rethink his or her live. Live here and now, love and hate - as long as you can - this is what "Bite the Dust" is about.
It is my first feature film and my first little step up the stairs of cinema. As a director, I would like to try different genres in future. The greatest impact on me as a filmmaker has life itself. Real stories inspire much more than moving pictures on screen.
I wanted to create a light, beautiful, universal story that would be understood all over the world. I was inspired by Russian culture, Russian village but the idea was to bring it more into the fantasy, artistic universe. I hope that people will watch my movie with an open heart."

Producer's note:
"The lack of fine witty comedies is really common nowadays. The graduate of my class in the All-Russian State Institute of Cinematography, young talented filmmaker Taisia ​​Igumentseva has got the rare talent to see joy and humor in the everyday life routine, and her first feature film project interested me on the stage of a short synopsis. "Bite the Dust" is a bright comedy made by an intellectual person with a good sense of humor."

Outlook for Russian cinema is looking up, with three films in Toronto’s Contemporary Worl