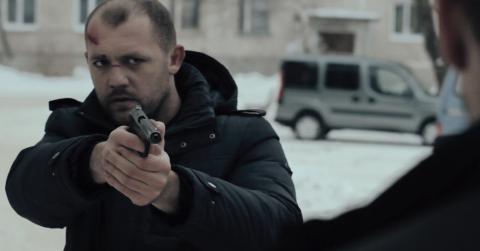 Playing out over the course of one day, The Major is a gripping drama that sees screenwriter-director Yuri Bykov deliver an indicting criticism of police corruption and the collateral damage it leaves behind.

Speeding down a rural road towards the hospital where his wife is giving birth, Sergey Sobolev (Denis Shvedov), a police major at a small city precinct, runs over a boy — with the boy's mother, Irina, standing helplessly nearby. In a split-second decision, he locks the fainting mother in his car and calls in fellow officer Kroshunov (played with dutiful determination by Bykov himself).

What seems to be a quick fix (modifying the investigators' report; duping Irina into drinking alcohol before a blood test), has larger consequences. Local officials are keen to avoid any probing by city investigators into their corrupt dealings, so when Irina and her husband refuse to sign falsified testimonies, events spiral out of Kroshunov's control. His questionable ethics, and the corrupted moral codes by which the police operate, clash against Major Sobolev's change of heart.

In a world where nobody seems to have a clean past, the film's roving camera captures the escalating events with pitch perfect immediacy — offering a glimpse at the never-ending cycle of complicity and corruption.

Bykov's viewpoint is painted in drab, faded colours and, as the credits roll, the film leaves no heroes, just victims of circumstance and their own (un)doing.

Outlook for Russian cinema is looking up, with three films in Toronto’s Contemporary Worl