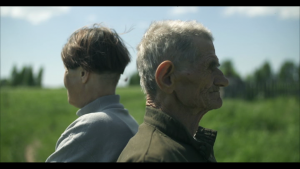 Nikolay Kochegarov is the only resident living in the village Pashki. His house stands in the middle of the field and it is the only one left in the village. He has spent his life serving sentences for theft, for killing his wife. He had a son who spent his life drinking a lot and robbing houses. Once the son attacked him, while defending himself father killed his son. The father was put on probation. It happened in 2011. Now he leads a solitary life, there is now way to approach the village in winter time. Every summer his daughter Tatyana visits him. She loves him as he is. And he loves her.

This is a film about love between a father and his daughter, about Russian soul, and abour remote places on Earth where passions may run high.